Mr. Jackson is presently employed by the Civil Aviation Authority (CAA) as Director of Air Navigation Regulation, and has been involved in the aviation industry for the past 28 years. His career started with the Civil Aviation Department, predecessor to the Civil Aviation Authority and the Cayman Islands Airports Authority, as an Aeronautical Information Service Officer in 1981 following graduation from John Gray High School. During the same year he was promoted to Meteorological Observer. He achieved further promotions to Aerodrome and Approach Controller in 1984, Head of Air Traffic Services in 1995, as well as Aircraft Accident and Incident Investigator in 1996, prior to being appointed to his current position in 2004 within the CAA.

Remarking on the appointment, Chairman of the CIAA Board of Directors, Mr. Harding Watler said, "On behalf of the Board, I congratulate Mr. Jackson on his selection as the new CEO, which comes at a time when the Authority is poised for a major redevelopment of Owen Roberts International Airport. We are confident that he will steadfastly meet the challenges of this project as well as other airport initiatives. We are also extremely grateful to Mr. Fred Sambula who served in an exemplary and distinguished manner as Acting CEO since May 2008, and so capably filled the role during a critical turning point for the CIAA."

As he prepares to assume his new role in November 2008, Mr. Jac kson said, "I am profoundly grateful for this opportunity to manage the Airports Authority's aviation system which was built by my predecessors. Achieving optimum profitability and maximum safety is the management philosophy and vision that will be instilled in the CIAA throughout my tenure as CEO. I would like to express my sincere appreciation to my colleagues for the mentoring and guidance they provided throughout my career with the Civil Aviation Authority." 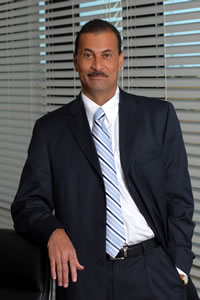 Mr. Jackson will be responsible for the day-to-day management of the airports, on Grand Cayman and Cayman Brac. He will direct the strategic development of airport initiatives, such as safety management systems, in addition to ensuring that the CIAA maximizes commercial opportunities. Additionally, he will direct and control financial and operational matters whilst ensuring that both our airports remain in compliance with civil aviation regulations and international standards. He will also liaise with the relevant government departments and the Civil Aviation Authority regarding the continued development of our airports infrastructure.

Mr. Jackson is married and resides in Spotts Newlands with his wife, Torri and their two children.