Located in the northwest Caribbean at 19 N 81 W the three Cayman Islands enjoys mainly tropical weather conditions with slight seasonal variation. The unique position places the Cayman Islands far enough north to be affected by cold front during the winter and still within the belt that is influenced by tropical waves and hurricanes during the summer. Climatically the year can be divided into two seasons - the wet, summer season, generally from mid-May through October and the dry, winter season, from November to April. 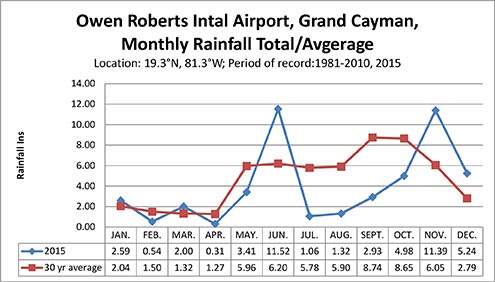 The average wind for 2015 was from the east at 8 knots. The windiest month was December and June when wind speeds averaged 09 knots, while the lowest wind speeds of 5 knots were recorded in September. For month of April, August to October the prevailing wind direction were from east to southeast, while an east to northeast wind prevailed for the rest of the year.

The United States of America has daylight saving, however the Cayman Islands, being nearer to the equator, has fairly equal periods of day and night year round. There’s really only about an hour’s difference in daylight between June 20th and December 20th. So all year, Cayman has the same time, -5 hours Coordinated Universal time (UTC).

This means the Islands share Eastern Standard Time (EST= -5 UTC) with Miami and New York from November through April. When the USA switches to Daylight Savings Time in April, Cayman then shares Central Daylight Time (CDT= -5 UTC) with Chicago and Houston.

This doesn’t cause too much confusion – it’s automatically factored into airline tickets. Residents sometimes think in terms of Miami time. Half the year, we have the same time as Miami; half the year, we’re an hour behind Miami.  However, being aware of the situation is important if you have to call California before noon Pacific Time.